Ones To Watch in 2018: The Night Market Jonathan Moore. 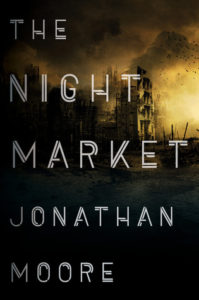 It’s late Thursday night, and Inspector Ross Carver is at a crime scene in one of the city’s last luxury homes. The dead man on the floor is covered by an unknown substance that’s eating through his skin. Before Carver can identify it, six FBI agents burst in and remove him from the premises. He’s pushed into a disinfectant trailer, forced to drink a liquid that sends him into seizures, and is shocked unconscious. On Sunday he wakes in his bed to find his neighbor, Mia—who he’s barely ever spoken to—reading aloud to him. He can’t remember the crime scene or how he got home; he has no idea two days have passed. Mia says she saw him being carried into their building by plainclothes police officers, who told her he’d been poisoned. Carver doesn’t really know this woman and has no way of disproving her, but his gut says to keep her close.

A mind-bending, masterfully plotted thriller—written in Moore’s “lush, intoxicating style” (Justin Cronin)—that will captivate fans of Blake Crouch, China Miéville, and Lauren Beukes, The Night Market follows Carver as he works to find out what happened to him, soon realizing he’s entangled in a web of conspiracy that spans the nation. And that Mia may know a lot more than she lets on.

Brilliant. The last book in the loosely connected Noir San Francisco trilogy and probably my favourite of the three, The Night Market is creepy and intense, set years after the events of the previous books and throwing us into a world that is the same but also quite quite different.

Beautifully descriptive both in character and setting the San Francisco we find in “The Night Market” has a tangibly different feel to it than before. Carver lives here, is part of the law here and so through him we can see the different nuances and the sense of feeling Mr Moore brings to the narrative is wonderfully absorbing.

From the very first chapters where we, the readers, feel the full impact of what happens to Carver, then watch him haunted by the missing memories, determined to find out the truth, it is utterly gripping and plays on your mind while you are away from it  -It never really lets up  until that very last page, with its beautifully emotive ending. The theme running through it is scarily authentic, a possible future that is far from beyond the realms of possibility – a thought provoking nightmare journey that Carver takes us on with him.

An unpredictable story told with razor sharp edges and deeply felt impassioned moments, The Night Market cleverly and rather brutally yet beautifully brings an end to this show – With The Poison Artist you get a psychological thriller with a classically layered unreliable narrator, with The Dark Room you get a tense, nail biting police procedural and character drama, with The Night Market you get a speculative dystopian tale and holding all of these together is that city – San Francisco – in all its glory – and the people that live there.

If you’ve not read The Poison Artist or The Dark Room yet then I recommend them – whilst each novel stands on its own, read all together they make a complete work of art.

Follow Jonathan on Twitter for updates, you can Pre-Order The Night Market or if you can’t wait why not catch up with The Poison Artist and/or The Dark Room. 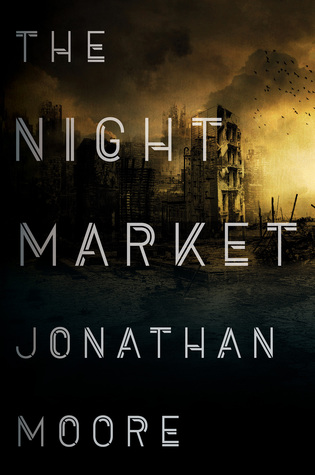