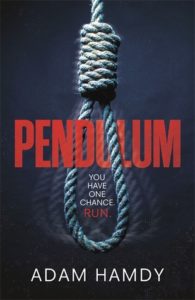 Today it is Pendulum release day, you can find a link to my review below, but to mark the occasion I asked Adam Hamdy my 20 Questions. Pendulum – great book by the way. Don’t miss it!

So, Pendulum then. I rather loved it. Although the killer in it is akin to mashing up Jason and Michael Myers then shoving them on acid. So what started the story off for you? And tell us a little about it…

You wake up to find yourself being hanged, but somehow manage to escape. Everyone thinks you tried to kill yourself, but the truth is you’re being targeted by a masked killer who will stop at nothing until you’re dead.

That’s Pendulum in a nutshell. I’m disappointed you think Pendulum is Jason and Michael Myers on acid. I would have said PCP, which is a far more corrosive and violent drug. But Pendulum’s murderous rampage can’t be blamed on any narcotics. Beneath all the mayhem lies a man warped by trauma who decides violence is the best way of expressing himself.

Pendulum started with the killer, with the idea that we now live in a world of random connections, where a total stranger might have a compelling reason to target someone for death. And then I had the idea for John Wallace, the central character, as this flawed everyman. He could be anyone of us, unwittingly incurring the wrath of a dangerous killer.

We’ve met once. Mostly when I’m doing these questions I know somebody quite well so let me say you are a VERY brave man – Also tell me what your favourite flavour of crisp is. It tells a lot about a person I find…

In the UK it would have to be Kettle Chips Sweet Chilli & Sour Cream. In France, I’m partial to the wrongness that is peanut flavoured corn puffs.

I’m a perpetual optimist, so generally believe the best things lie ahead. However, the best part of being a writer so far has been the flexible working, which has enabled me to spend a lot of time with my family. My wife is a journalist and somehow we’ve managed to juggle things so that at least one of us is always there for the children, something that would have been impossible in my former career (I used to be a management consultant).

The worst thing has definitely been the penurious lifestyle of a struggling writer. When I decided to quit my corporate career to write full time, I just went cold turkey and made the transition overnight. There was no sensible crossover period, and I hadn’t fully thought through the implications of going from making a decent salary to having no income whatsoever. However, there’s nothing as motivating as having the wolf howling at your door, and after a few ridiculously tough years I was able to shut it up with some scraps.

So Crime in the Court was fun right? Lots of people. Mad insane bookish type people but they are our people. Did you enjoy it? Would you go again?

I love Crime in the Court. This was my second and it was a lot of fun. I’m always amazed at how friendly and welcoming the crime community is, and sometimes wonder what I’ve done to deserve my good fortune. I’ve fallen in with such a great, warm, supportive group of people. So, yes, I will go again. I’d recommend it to any crime fan.

Pendulum is the start of a series – I want to say trilogy but I’m writing this from under my duvet with no access to actual information so you can correct me if necessary – but I DO know there is more to come. How on earth will you top that though? No pressure or anything…

Your duvet is obviously a repository of accurate information. Pendulum is the first book in a trilogy. According to my grand plan, I’m approximately five days away from finishing the first draft of the second instalment, which has been an absolute blast to write. Maybe I have a twisted streak, but it’s been great fun putting the central characters through yet another punishing ordeal, and the crime at the heart of the second book casts the events of Pendulum in an entirely new light, so people are in for something of a revelation.

I try not to think about pressure and simply focus on writing the best, most exciting, engaging story that I can. But now that you’ve got me thinking about pressure, pressure, PRESSURE…my mind has gone…BLANK.

Right, I’m back. Next question.

So difficult to choose, but if you put me on a chair and slipped a noose around my neck, I’d have to say Blood Symmetry by Kate Rhodes.

One film to rule them all…

Again, very difficult, but it would have to be The Godfather. It’s a fascinating study of the corrupting nature of power.

Come on! This just isn’t fair. How am I going to face my little cheese buddies? When that fridge light goes on and they all stare up at my guilt-ridden face, they’re going to know that I’ve picked a favourite.

What kind of writerly type are you? Pre-planning all goes brilliantly genius or locked in the attic wishing to God someone would rescue you soon….

I work a lot, and I always plan. I’m currently adapting Pendulum for NBC Universal and am writing the pilot of a crime thriller series I’ve created for the BBC. Without discipline and a strong work ethic, the wheels would come off. There are days when I wake up under a cloud and want to crawl into an attic, but I remind myself what a privilege it is to write for a living, and just how hard I’ve worked to get to this point. Then I force myself to scrawl a few words, and pretty soon the cloud has given up and floated into the attic on its own.

The best piece of life advice you’ve ever been given…

Worrying is borrowing misery from the future. Things rarely work out as well or as badly as one imagines. Just go with the flow.

Which author would you LOVE to read Pendulum and respond positively…

I’m thrilled that James Patterson loved Pendulum, but if I had to pick another idol, it would be Stephen King. He was one of my teen heroes.

So I wrote you a review which you seemed happy with. Excellent. I aim to please when I love a book – do you think you will read every review you can find or are you going to sensibly try and ignore most of it…

Thanks. I was genuinely thrilled by your review. If people tag me on Twitter, I will try to read the review because it takes time and effort to read and review a book and I think that merits recognition, but I won’t be obsessively trawling Amazon or Goodreads because for every person that likes your book, there will be at least one other who doesn’t. That way madness lies.

Desert Island Discs…pick 3 songs that speak to your soul…

Tough one. I listen to a lot of songs that speak to my soul, but if I had to pick three songs for a desert island, they would be:

Shine on You Crazy Diamond, Pink Floyd’s epic from the Wish You Were Here album. The subject matter and arrangement make it one of the most haunting tracks of all time, and it was one of my dad’s favourites.

Time by Jungle, which is just a beautifully produced modern funk anthem taken from their eponymous debut album which is stacked full of great tracks.

I got my first Sony Walkman when I was living in Egypt, and the country still had war rationing, so western music was pretty rare. My mum gave me one of her old cassettes for my snazzy new machine and I was introduced to Led Zeppelin for the first time. The Battle of Evermore just blew my tiny little mind and was on almost constant repeat, so that would be my third and final song.

If you had to be locked in a room for 3 days with only 2 other people for company who would you pick and why?

The first would have to be my lovely wife Amy, because for the past twelve years we’ve shared the same office, and spend almost every day together, so I know we could easily manage three days in a locked room.

The second person would have to be my good friend Arvinder, because I know we could have a great laugh filling the time with Seinfeld-style conversations about nothing. He and his partner are about to have their first child, so in a few months three days in a locked room might appeal to him.

Sell Pendulum to the next reader using 3 sentences or less…

I get all bashful, so I’m going to use James Patterson’s words instead. “I read Pendulum in one gloriously suspenseful weekend. Definitely one of the best thrillers of the year.”

2 things that irritate you beyond all measure…

Someone famous, living or dead, who you would say inspires you…

Rudi Vrba. He was one of the few people to escape Auschwitz and he and his fellow escapee, Alfred Wetzler, were responsible for authoring the Auschwitz Protocol, a highly influential document that helped stop the mass transportation of Jews from Hungary.

Vrba tells his story in I Escaped from Auschwitz, a book that should be required reading in all schools, because it demonstrates how labelling someone as ‘the other’ can be the first dehumanising step on a well-trodden road that can lead to persecution and murder. I think people sometimes struggle with the scale of the Holocaust, but as Vrba chronicles his ordeal and describes the various parts of the Nazi machine, one can see how infernally simple and disgustingly practical the whole operation was. But I Escaped from Auschwitz isn’t simply a harrowing account of Vrba’s experiences, it’s also an amazing tale of the triumph of the human spirit. Vrba went through an ordeal that was as close as one can get to hell on earth, but sheer grit and determination saw him not only survive, but save the lives of many others. An inspiring individual.

Last thing you did that was probably stupid…

Injured myself falling off a bouldering wall that I had no business trying in the first place.

What’s to hate? I’ve had fun. So the precise answer is zero percent. Thanks for giving me the opportunity to answer such great questions.

Read my review of Pendulum HERE 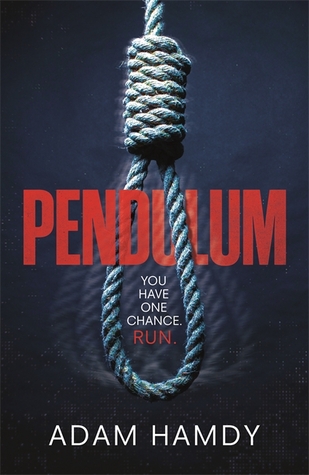